Home > Blog > What is a Pen Gun and Is it a Legal Firearm? Unique Guns at Auction

What is a Pen Gun and Is it a Legal Firearm? Unique Guns at Auction

When it comes to unique and ornate firearms, the pen gun is high on the list. A pen gun is not…

When it comes to unique and ornate firearms, the pen gun is high on the list. A pen gun is not actually a pen, but a pen-sized pistol designed for extreme stealth. In the mid-1990s, R.J. Braverman produced the Braverman Stinger pen gun, and collectors can find one for sale at a gun auction near you.

Learn everything you need to know about the Braverman Stinger pen gun. Find out how it works, how valuable it is at auction and the legal categorization of this firearm. And, discover what the benefits and drawbacks are to using a pen gun as a personal protection weapon.

The Braverman Stinger pen gun is not a widely used firearm, nor is it overly practical – but it is, undoubtedly, one of the most unique guns you can add to your firearm collection. Disguised as a common fountain pen, this tiny firearm folds into an “L” shape to engage the action, popping out a little trigger. And, it is this folding action that, under the National Firearms Act (NFA), allows the pen gun to avoid classification as an Any Other Weapon (AOW).

What Are Pen Guns?

Since the inception of single cartridge ammunition, gunsmiths have endeavored to create stealth weapons for mostly military purposes. Since the early 19th-century, firearms have been disguised as canes, lighters, belt buckles, watches, and fountain pens. The first pen guns came about in the 1920s, designed for state-actors and spies to use while carrying-out missions of geopolitical and military espionage.

The pen gun was rifled for small rounds, such as a .22 caliber, and only holds a single round. After firing the round, the shooter has to reload the weapon, which usually involves removing the barrel. All in all, the pen gun’s advantage is stealth, while its drawbacks are its low capacity, power, and accuracy.

Through the Second World War and the Cold War, the pen guns used by spies are legally classified as an AOW. So, you can’t easily buy models like the Penguin unless you complete NFA paperwork for a tax stamp. But, unlike these spy weapons, the Stinger pen gun is unique, in that it is classified as a legal handgun by the ATF and readily transferable like most guns.

The Stinger is an NFA-friendly pen gun because the firing operation functions in the same way as a normal handgun. Unlike a WWII or Cold War spy, the Stinger looks like an ordinary pen, until the shooter puts it into its firing configuration. When the gun is in its “Pen” configuration, it is impossible to use as a firearm. Therefore, since the gun holds no firing functionality outside of its firing configuration, it is – for all intents and purposes – a standard firearm.

To transform the pen into a gun, you pull the cylinder which engages a hinge in the center of the pen. The hinge allows you to pivot the cylinder about 90-degrees, into an “L” shape. Once the cylinder re-engages in this position, a trigger pops out.

To fire the gun, turn the safety off, located on the barrel, by rotating it counterclockwise. At this point, the gun is ready to fire. After expending the single piece of ammunition in the barrel, you unscrew the barrel from the chamber, eject the spent cartridge, and reload another round into the barrel chamber.

At just over 6 inches long, the Braverman Stinger presents some serious drawbacks for use as a practical weapon. The gun is just about the same size as a real fountain pen, leaving it an extraordinarily short barrel from which to fire. And, the shorter the barrel, the less accurate the firearm.

In real-world firing tests, it is almost impossible to hit a target at a distance of 20-feet. Like any pen gun, the Stinger’s only practical use is at an extremely close distance, which is suitable for personal defense. With a single-round capacity, however, it is not a practical conceal-and-carry weapon.

Nonetheless, the Braverman Stinger is fun to shoot and makes a valuable addition to any collection. These little guns saw a limited production period, with the Stinger Manufacturing Company finally going out of business in 2004. Since the period of production for the Stinger was less than a decade, these little guns command a pretty penny at auction.

So, whether or not you ever use a Stinger to commit international espionage, it is a fun and collectible piece that always draws a good conversation. Want to find out more about guns in an upcoming auction or adding your firearms to the auction list? Talk to a firearms auction expert today to bid on a pen gun for your collection and many other rare and collectible firearms.

What is a Flintlock Pistol? The History and Mechanics of Muzzleloaders
Read More 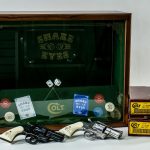