The Collectors Guide to the M1941 Johnson Rifle and Johnson LMG

When you think of World War II, the gun that comes to mind is likely the M1 Garand – but it…

When you think of World War II, the gun that comes to mind is likely the M1 Garand – but it had stiff competition from the m1941 johnson rifle. And, though the United States Military decided against standardizing the M1941 Johnson rifle, it was issued to a limited number of Marine Corps units in the Pacific.

Today, the M1941 is a valuable antique gun for firearms collectors. Learn everything you need to know about the history and collectability of the M1941 Johnson rifle. And, discover why it is in high-demand at firearms auctions across the Northeastern United States.

On the battlefields of WWII, the M1 Garand rifle outnumbered the m1941 Johnson Rifle and Johnson Light Machine Gun (LMG) by millions. Only a few hundred Johnson rifles and LMG’s were procured by the Military for service in WWII. Nonetheless, the iconic Johnson rifle is one of the most interesting and collectible firearms from the War.

The Johnson Rifle vs Johnson LMG

The Johnson rifle and LMG parallel each other in terms of design, parts, and function. They operate by a short recoil and rotating bolt. The single-column standard magazine for the Johnson LMG holds 20-rounds and attaches to the left side of the receiver.

The M1941 Johnson rifle is semi-automatic and holds a 5-round clip. In battle, both weapons can load at the port of ejection via stripper clip, or by loading the rounds one-at-a-time into the breach. The Johnson LMG features an adjustable rate of fire, capable of 200 to 600 rounds per minute.

M1941 Johnson Rifle at Auction and What It’s Worth

Even though Johnson’s design didn’t catch fire in WWII, it has become a highly collectible piece for historical and antique firearms collectors. Located in Providence Rhode Island, the Johnson Automatics factory continues a rich tradition of firearms manufacturing in the Northeastern United States. And, today, you can find models of the Johnson M1941 rifle in circulation at firearms auctions around the Northeast.

You can find models of the prototype M1941 Johnson 30-06 rifle at auction with a wide range of wear-and-tear. A factory original model, in good functioning order, can range in price from two to five thousand dollars. An M1941 Johnson rifle recently sold for the hammer price of $3,400 at auction in Connecticut.

Johnson was unimpressed by the M1 Garand and endeavored to create a rifle that would perform more effectively for United States troops on the battlefield. Despite several superior features of the Johnson rifle, the Army rejected it after testing. Instead, the Army gave the contract to it’s tried and true partner – the Springfield Armory.

In 1940, the Dutch East Indies, or modern-day Indonesia faced imminent invasion from the Japanese Army. After testing the M1941 Johnson Rifle against the M1 Garand, the Netherlands placed an order of 30,000 Johnson rifles and 100 more for field testing. But, the Johnson rifles never reached their destination in time.

On December 7, 1941, Japanese forces attacked the United States at Pearl Harbor, Hawaii, thrusting the United States into the raging global conflict. Before the first shipment of Johnson rifles could get to the Netherland Military, the Dutch East Indies were invaded. And, with a multi-front war immediately facing the United States, the U.S. Military quickly bought Johnson’s surplus stock of rifles and LMG’s.

From 1941 to 1944, the United States Special Marine Corps Parachute and Raider battalions were so fond of Johnson’s guns in jungle warfare, that they officially adopted the M1941 Rifle and LMG. In 1944, however, the M1 Garand became standard issue for all troops in the Pacific and the Johnson Rifle was disbanded.

In jungle warfare, Marine units testified to several advantages of the Johnson rifle and LMG, over the M1 Garand. One of the greatest advantages of Johnson’s design is the speed of loading. Johnson’s design allows the shooter to load a 5-round clip or single-round into the magazine, while there is a round in the chamber.

Find a Johnson Rifle for Your Collection or Get an Appraisal

Even though the Johnson rifle was passed over for the M1 Garand by the United States Military, doesn’t mean the gun hasn’t inspired a following. Not only – is the Johnson rifle a historical treasure that looks good in any collection – it is a distinct pleasure to shoot on the range.

Estate collections often contain rare treasures, like an original M1941 Johnson rifle, that you don’t know what to do with. If you find yourself with spare firearms, call a local gun auction to get a free appraisal. And, subscribe to the newsletter to be the first to see upcoming auction lots. 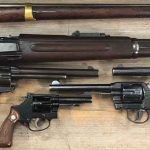 “What are we going to do with the Guns?”
Read More