Alongside other single-shot breech-loading rifles, the Sharps rifle and carbine played a distinct role in the progression of United States military…

Alongside other single-shot breech-loading rifles, the Sharps rifle and carbine played a distinct role in the progression of United States military history in the late-1800’s. During the Civil War, the carbine iteration of the Sharps falling block became a popular choice for cavalry on both sides of the war. And, in the years that followed the Civil War – as Americans settled into the Western frontier, it eventually would become famously associated with the near-extinction of the American Bison.

Today, the rifle is highly-sought by collectors, firearms enthusiasts, military history buffs – and anyone who appreciates the classic black-powder rifles of the late-19th-century. Find out about the history behind the Sharps rifle, its inception, and usage on the battlefield during the late-1800’s. And, learn where to bid on an authentic 1874 Sharps sporting model or military carbine.

The first Sharps rifle to be mass-produced was the 1851 carbine model, rivaling other single-action rifles of the day, like the Springfield. Technically – it was the third iteration to be produced by Christian Sharps, but the first to warrant a contract for the manufacture of 10,000 rifles. This contract helped Christian Sharps establish a manufacturing company in the same year, with a factory in Hartford, Connecticut.

And, despite Sharps’s departure from the company two years later, the rifle continued to thrive for many years and several design variations.

Sharps Military Rifle and Carbine: Used in the Civil War and After

Unlike many other single-shot rifles of the time, the Sharps carbine implemented a unique method of feeding the primer pellets. It utilized a percussion cap – similar to its contemporaries – but deviated from design standards of the day. The Sharps carbine rifle holds a stack of pellet primers, enabling a shooter to more easily reload and fire the rifle while riding on horseback.

Most famously, the Sharps rifle was one of the most popular models used by snipers during the Civil War. Modern firearms scholars debate whether the true benefit of the Sharps long-gun was accuracy, instead of a superior higher-fire rate than that of its muzzle-loading counterparts. At least one area of consensus is that the rifle certainly was much more prohibitively expensive – as, the cost of a brand-new Springfield muzzle-loader was one-third the price.

At first, the United States military was skeptical of the rifle, thinking that the higher rate-of-fire would lead soldiers to unnecessarily waste precious ammunition. It was the same argument presented by the US military in the late-1930’s, before WWII, regarding adopting a higher-rate-of-fire machine gun – like the machine gun used by the German Army in WWII.

But, the rifle gained slow-to-grow acceptance with military and civilian shooters. This is especially true with the 1863 Carbine, which eventually was able to be modified for cartridge-fire ammunition. Unlike the original Sharps long-gun rifle, the Sharps Carbine rifle gained wide-acceptance, with over 90,000 manufactured during the timeline in which the rifle was produced.

The model 1874 Sharps rifle fired one of the most powerful black-powder rounds ever shot from a long-gun. The rifle was designed to be accurate at up-to 1,000-yards, which was perfect for target shooters of the day. By the time the Civil War was over, most of the military was switching over to rifles that fired cartridge-ammunition, while most Sharps long-guns became exclusive to sharpshooters. And, in the consumer market, the 1874 model was repurposed and retrofitted by most owners to accept cartridge-fire ammunition.

Less than 10,000 models 1874 rifles were manufactured, as opposed to the 1874’s predecessor – the Sharps percussion rifle, of which over 100,000 were produced and adapted for cartridge-fire ammunition after the Civil War. Today, there are many reproductions available from manufacturers all over the world, but – to find a real, original, authentic Sharps Rifle in good firing condition, find an antique firearms auction house near you and ask an associate how to browse the upcoming auction inventory. 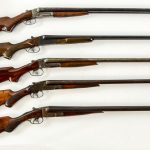