The forward-thinking company has a long history of supplying firearms to militaries and law enforcement agencies all over the globe.

Heckler & Koch firearms are some of the most advanced and well-made firearms in the world.

The forward-thinking company has a long history of supplying firearms to militaries and law enforcement agencies all over the globe, with more than 60 years of manufacturing expertise, inextricably linked with some of the most significant events of the 20th century, Heckler & Koch (H&K, HK) pistols, machine guns and sniper rifles are highly sought after by shooters and collectors alike for their accuracy, durability and sleek design.

In this article, we’ll take a closer look at Heckler & Koch’s origin, name changes, identifiable date and country codes, abbreviations and some of its most popular firearms, including those featured in past CT Firearms auctions.

HK’s beginnings date back to 1811, when King Friedrich I of Wuerttemberg established Königliche Waffen Schmieden (“Royal Weapons Forges”), an armory in the German town of Oberndorf, about an hour southwest of Stuttgart.

In 1874, brothers Wilhelm and Paul Mauser, both employees of the factory, struck out on their own. Employing a large division of forced laborers, the company produced around 70,000 rifles monthly for Nazis at its peak during World War II.

Following Germany’s May 1945 defeat, occupying French forces gained control of the Mauser factory. The factory supplied the French through March 1948, when the facility was gutted, its machines placed on railcars for shipment to a new French location.

Mauser engineers Edmund Heckler, Theodor Koch and Alex Seidel are reported to have covertly removed a set of machines from the railyard, hiding them beneath haystacks on a hill overlooking Oberndorf, according to a Reuters article.

In 1955, a ban on the German manufacturing of firearms was lifted, and the company began producing weapons under the Heckler & Koch name.

In 1956, the company was recruited by the new West German government to re-establish firearms manufacturing in Oberndorf after winning the bid to produce a new infantry rifle for the Bundeswehr (West German army).

The Gewehr 3 or G3 was Heckler & Koch’s first major success, and today, they can be found almost anywhere in the world, though it’s rare for a former military G3 to pop up in the United States. The G3 design served as a basis for several future HK weapons, such as the civilian market HK41, PSG1 and MSG90 sniper rifles, HK33 rifle, HK11 and HK21 light machine guns, the SR9 and MC51 carbine.

The selective-fire G3 (600 RPM on automatic) accepts a 7.62×51mm NATO cartridge and employs a roller-delayed blowback system instead of gas power. The trade-off for accuracy and reliable performance? An original G3 body, with flip-up sight, a wooden stock and handguard, weighs in around 9.9 lbs. and is constructed nearly entirely of pressed steel. Its power, versatility and adaptability (it can be easily converted into a formidable sniper rifle) have helped the G3 endure on the battlefield; several variations are still used by militaries around the globe.

In the early 1970s, Heckler & Koch began development of a semi-automatic precision rifle for law enforcement and military use. The PSG (Prazisions-Schutzen-Gewehr or “high-precision marksman’s rifle”) is mechanically based off the G3 and was designed in response to the September 1972 Munich Olympics massacre, as West German police lacked a reliable precision rifle capable of neutralizing terrorists while keeping hostages safe. 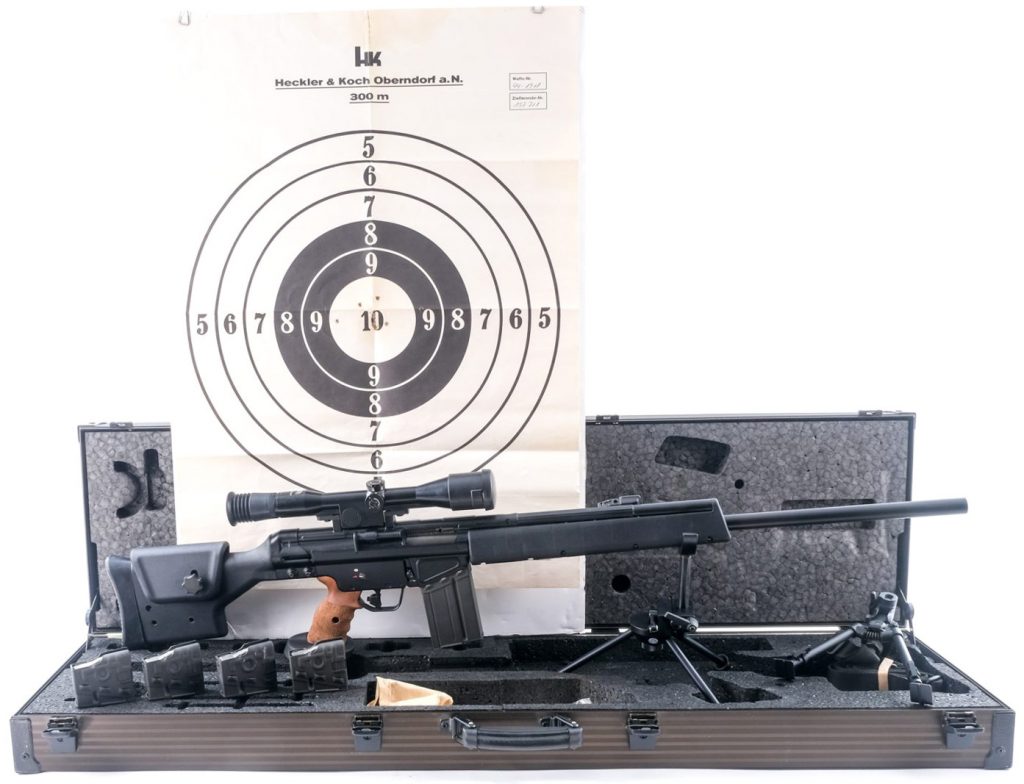 Like other HK military models, it’s rare for a PSG1 to arrive in the U.S., though CT Firearms Auction has been fortunate to list them in the past.

Reinforced receiver sides, an adjustable and removable trigger pack, adjustable palm shelf, adjustable buttstock (cheek and LOP) and a low-noise bolt closing mechanism are a few of PSG1 features, in addition to the match-grade heavy barrel and matched non-rollered bolt. PSG1s do not come equipped with iron sights; original models will include a Hensoldt 6A-42 scope with illuminated reticle mounted on top. Answering calls for a greater range and more modern scope, HK updated the PSG1A1 variant with a Schmidt & Bender 3–12×50 Police Marksman II scope, mounted on 34 mm (1.3 in) rings.

Developed by Heckler & Koch in the mid-1960s, the 9 mm MP5 submachine gun (Maschinenpistole 5) uses the same delayed blowback operating system found on the G3 rifle. Reliability, accuracy, ease of handling, simple maintenance, and safety — all the elements of HK excellence are highlighted on the MP5. Firing from the closed-bolt position in all modes of fire make MP5 submachine guns extremely accurate and controllable.

Barrels are made using cold hammer forging, a process pioneered and perfected by HK. Machined and stamped high strength steel and modern polymers make up the rest of the MP5. Continual product improvements over more than 50 years of production have kept the MP5 up-to-date and technologically current; it is firmly established as the world’s pre-eminent submachine gun among military and law enforcement users, with more than 120 variants.

The MP5, boasting a modular design for easy customization, features a selection of trigger groups, including “safe”, single-fire, full automatic, 2-round and 3-round burst options. Used widely by SWAT teams across the U.S. for years, the MP5 has since been replaced largely by M16 variants. Semi-automatic civilian models of the MP5 include the HK94, SP89, SP5K and the SP5.

One of Heckler & Koch’s most innovative weapons, the all-steel HK P7 is a sleek, single-stack squeeze cocker with a flush and minimalist design, weighing in just under 2 pounds. Like the PSG1, the semiautomatic, blowback-operated P7 was also designed in response to the Munich Olympics massacre, as German police sought a more effective service pistol. The P7 was introduced as the PSP (Polizei- Selbstlade-Pistole or “police self-loading pistol”). 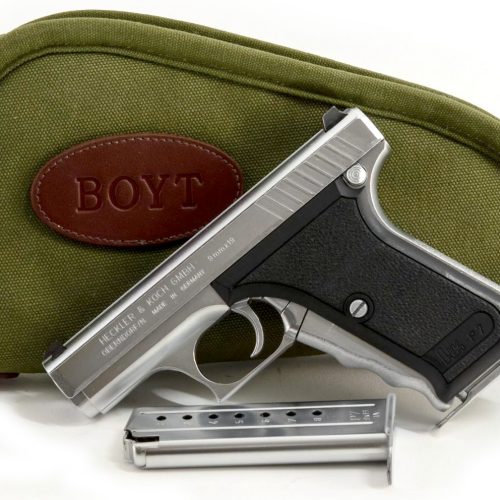 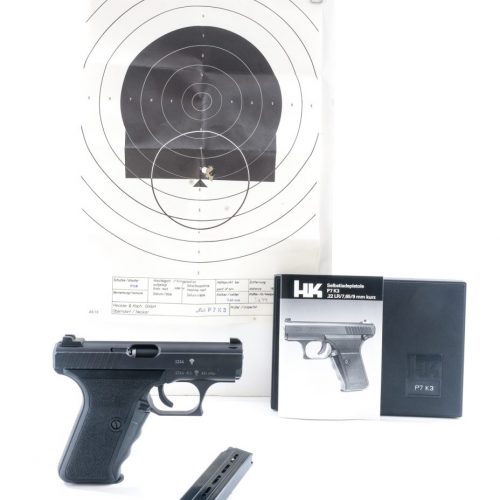 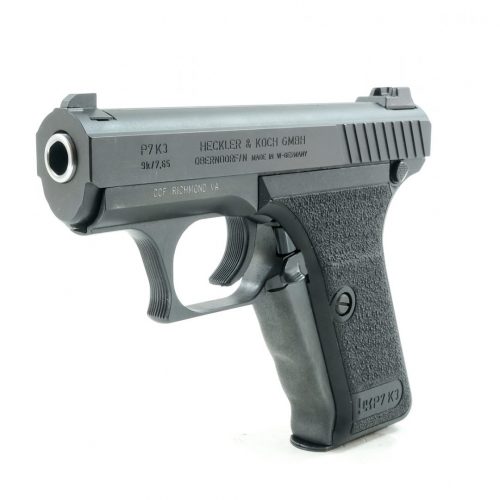 Produced from 1979 to 2008, the P7 uses a polygonal barrel rifling — an HK innovation — as opposed to traditional land-and-grooves rifling, with its magazine release located on its heel rather than top. Its gas retardation system slows down the rearward motion of the recoiling slide. The delay is long enough to ensure positive chambering of the empty shell and reduce recoil.

The P7 may look familiar to action film fans — the P7M13 variant, with the ability to carry 13+1 rounds, was the sidearm of choice for “Die Hard” villain Hans Gruber in the 1988 thriller.

Based off the AR-15 design, the Heckler & Koch HK416 is a gas-operated, selective-fire assault rifle weighing in at around 7 pounds and chambered for the NATO standard military cartridge, the .223 Remington/.556 NATO. Designed to improve upon the Colt M4 carbine, it’s perhaps best known as the weapon that killed Osama bin Laden during a 2011 raid.

The HK416 uses a proprietary short-stroke gas piston system derived from the Heckler & Koch G36, in lieu of the AR-15/M16’s direct impingement gas system. As such, it is classified as an assault rifle rather than a carbine like its M16 counterpart.

The HK 90s series of semi-automatic sporting rifles combines the advanced technology and superior craftsmanship that has made HK a leader in military firearms for decades. Each of the 90s series rifles — such as the HK 91A2, HK 91A3, HK 93A2, HK93A3, HK 94A2 and HK 94A3 — features HK’s unique delayed roller-locked bolt system and its extremely low recoil allows the shooter to stay on target for those crucial second and third shots. 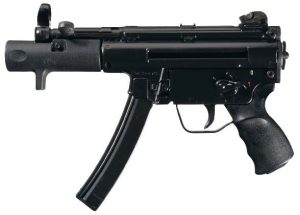 HK’s SP89 is a semi-automatic pistol, produced in limited runs as a shortened version of the HK 94 rifle.

All HK rifles are designed to take advantage of HK’s distinct scope mounting system. The HK 90 features cold hammer-forged barrels, which prolong barrel life and make them one of the most accurate production rifles on the market today. 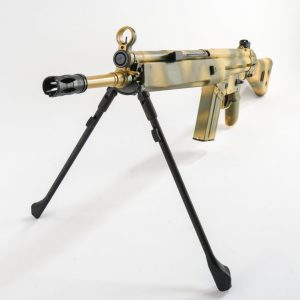 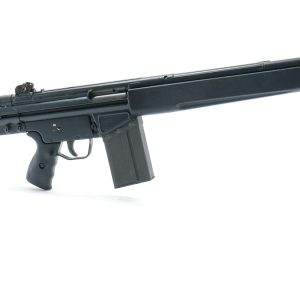 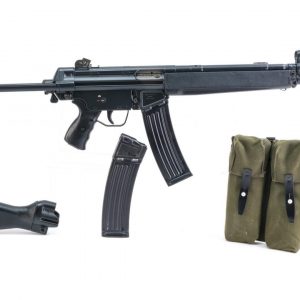 The availability of interchangeable stocks and a full line of accessories complement the HK 90 series. All HK 90 series rifles were originally available with an A.R.M.S. mount, B-square rings and a Leupold 3×9 compact scope with a matte finish.

H&K uses a letter combination to represent the year a pistol is manufactured.

Stay Up To Date!Get notifications and news direct from Connecticut Firearms Auction